Do you want to volunteer?

Fill out this quick and easy form, and we'll be in touch.

Thanks for sending a message!

We know that we are strongest when we work together. We need to build a national movement for proportional representation so that MPs know Canadians care about making every vote count.

Help us spread the word!

Leadnow is sustained by thousands of small, individual donations from across the country. Can you chip in to help fund the Vote Better campaign?

The Story of Vote Better

Electoral reform has long been a top priority for the Leadnow community, and it was the focus of much of our work during 2016 and 2017. Over the last year Leadnow ran a campaign calling on the Liberals to keep their promise and introduce proportional representation by the next election. We engaged thousands of people and helped make this issue part of the national dialogue.

Here’s a snapshot of the work we did together over the last year and a half:

In the 2015 election, the Liberals ran on a very clear promise to enact electoral reform. So after they won a majority, we knew that our next step would be to hold them accountable for that promise.

Within weeks of the election: The Liberals finally announced that they were launching an all-party committee to study electoral reform in May 2016, but also that it would be stacked by Liberals. The Bloc and Greens would have no vote. Pushback from the opposition and the Leadnow community caused them to reverse their decision and make the committee proportional instead.


May - October 2016: The Summer of Consultations

With the stage set for the process, we began to engage people online and offline on electoral reform. We launched our website - VoteBetter.ca - with information about proportional representation, and how to take action. Tens of thousands of people visited the site.

The Special Committee for Electoral Reform (ERRE) held public meetings in Ottawa and across the country while MPs also held town halls in their ridings throughout the summer and fall. The Leadnow community participated in the entire process: Leadnow also committed to getting more young people engaged in this process. Between September 27th and October 4th, we held four youth town halls in Vancouver, Winnipeg and Toronto. Approximately 225 youth ages 13-30 took part. We wrote a brief on our findings from the town halls and delivered it to the voting reform committee.[2] 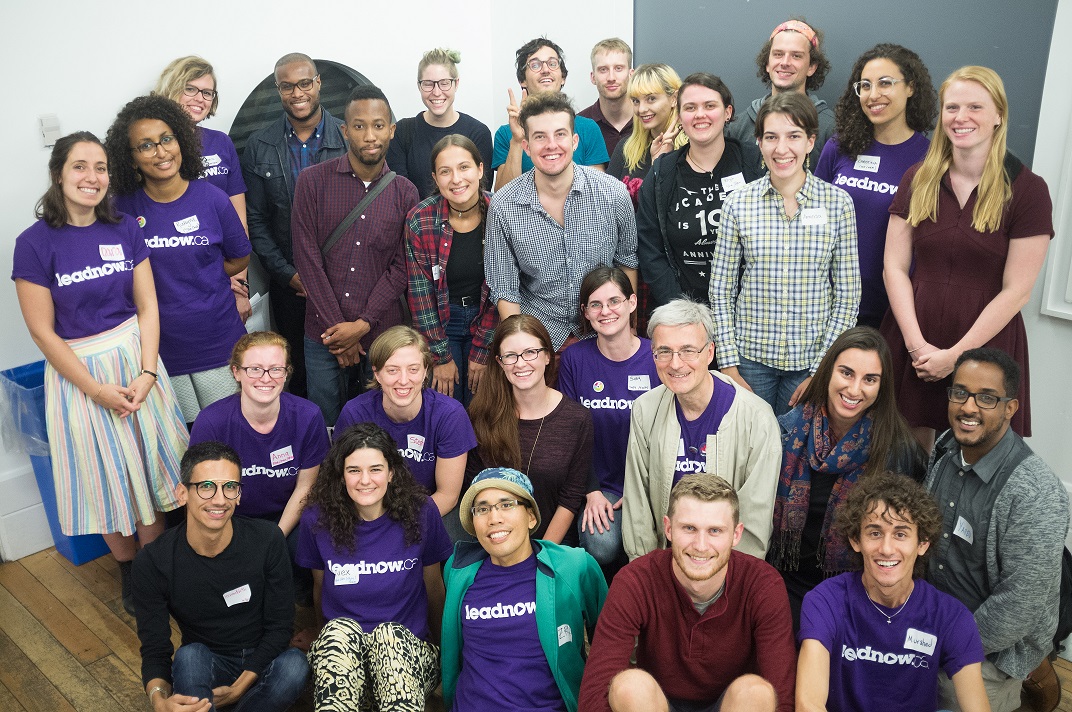 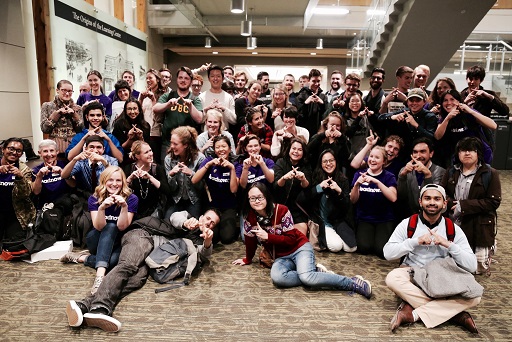 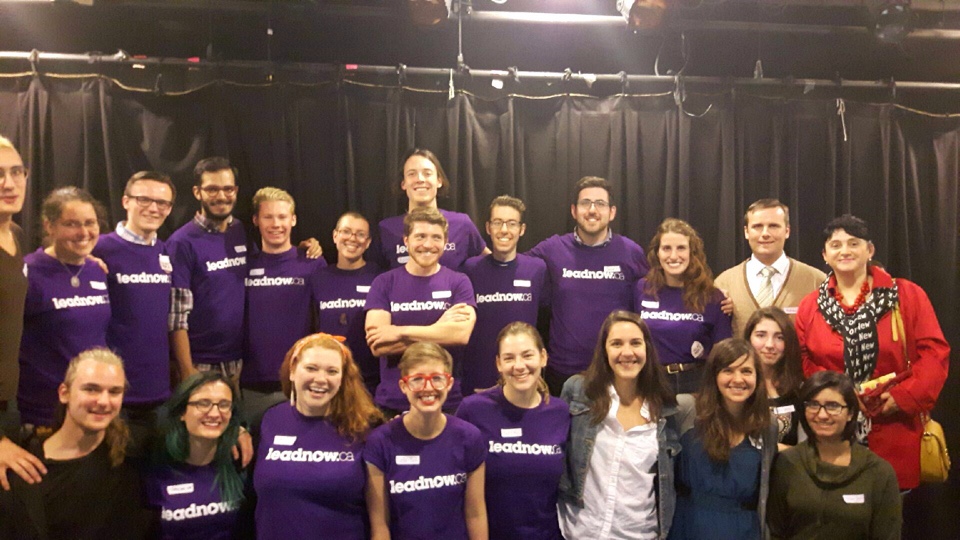 In October, Prime Minister Trudeau made comments in Le Devoir that indicated he was considering backing down from his promise. The Leadnow community leapt into action immediately to shoot down this trial balloon.

In just a few days we: As a result of the outrage, Trudeau made a point to publicly reaffirm his commitment to electoral reform.

A review of the testimony to ERRE showed that 88% of experts who spoke on the topic of voting systems supported proportional representation. We hopped on the phones again, and made over 1250 phone calls to Liberal members of ERRE urging them to side with the experts and recommend PR.

Finally, on December 1st, 2016 the ERRE committee finally tabled the results of their work. The topline recommendation was in support of proportional representation. It was a huge victory for the Leadnow community and reflected months of hard work.

But on the same day, the Liberals released a report dissenting against the rest of the committee’s recommendations, and Minister Monsef mocked the report and accused the committee of not doing their job.

All signs were beginning to point to a broken promise, so the Leadnow community got to work. In just a few days we organized the Make Every Vote Count National Day of Action. Leadnow members in over 60 communities held actions outside their MP offices and delivered gift-wrapped copies of the Liberal election promise on electoral reform to their doorsteps. 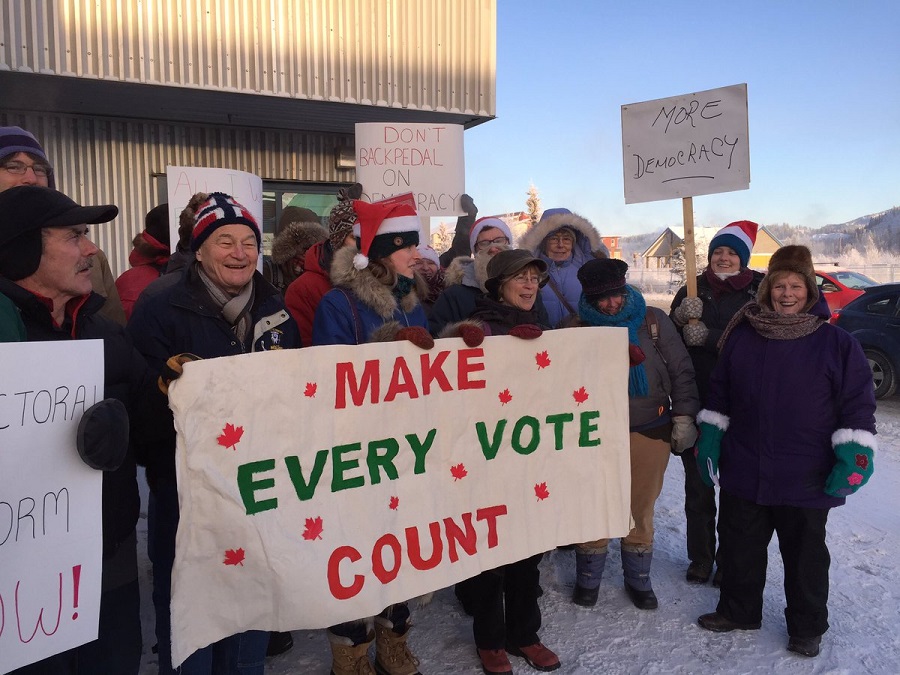 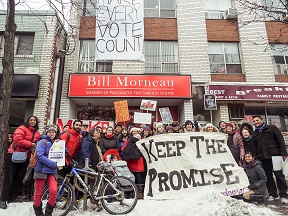 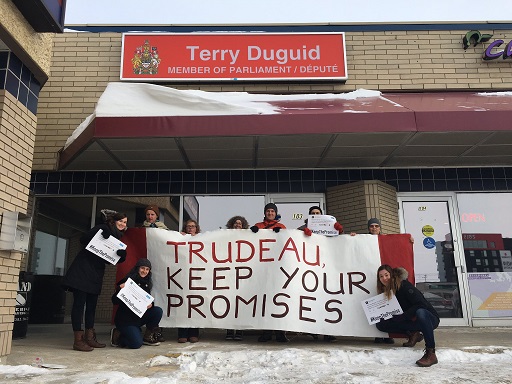 In January the Prime Minister did a cabinet shuffle, and Karina Gould became the new Minister of Democratic Institutions. On February 1st she made the announcement that the government would be breaking their promise on electoral reform.

The outrage was swift: The Liberals probably expected the outrage to die down quickly, but it didn’t - and you were ready to keep fighting. 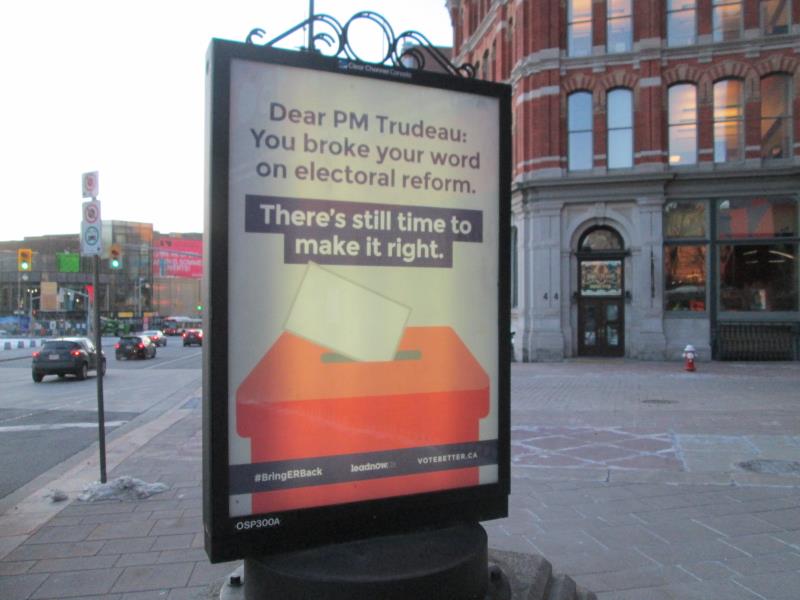 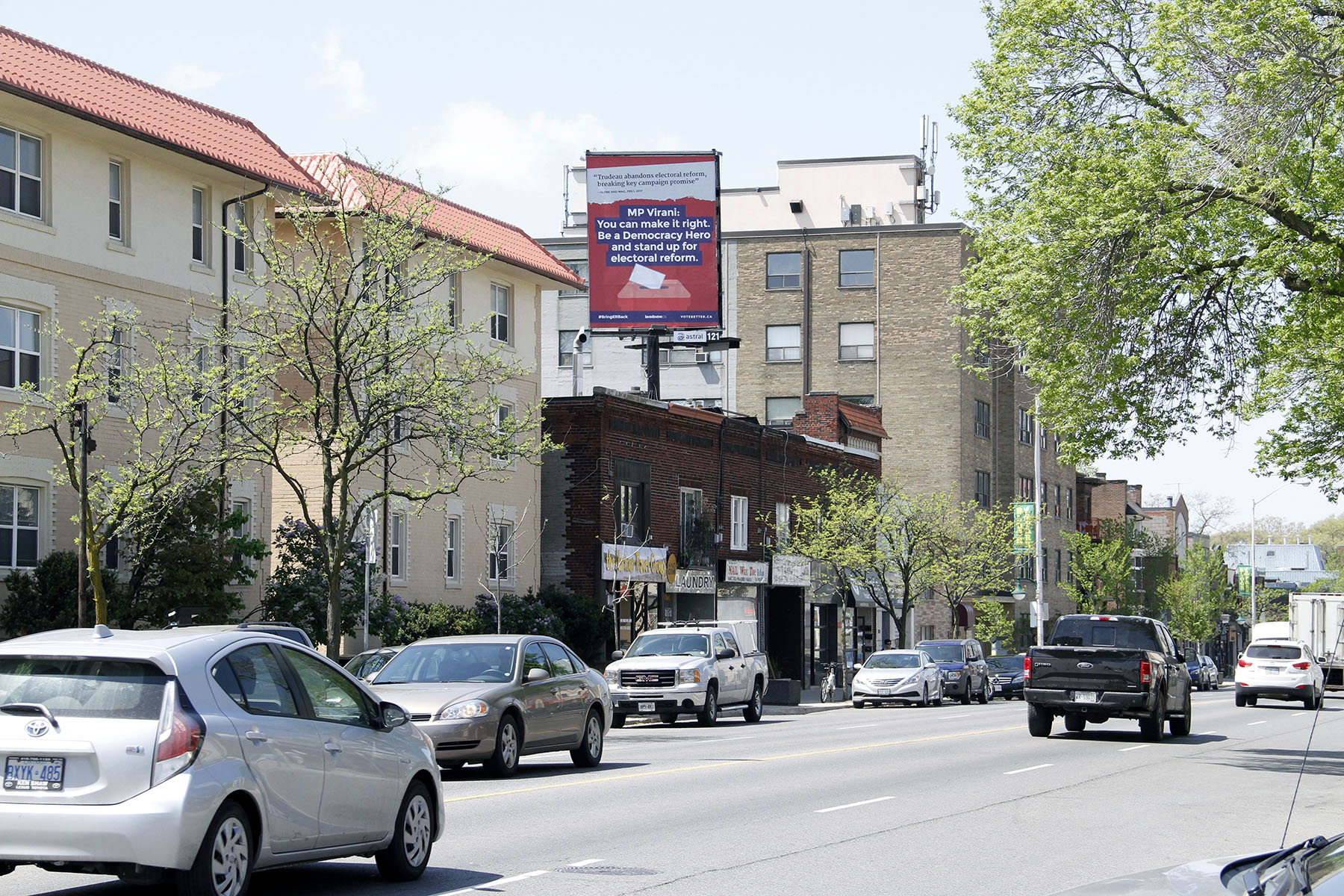 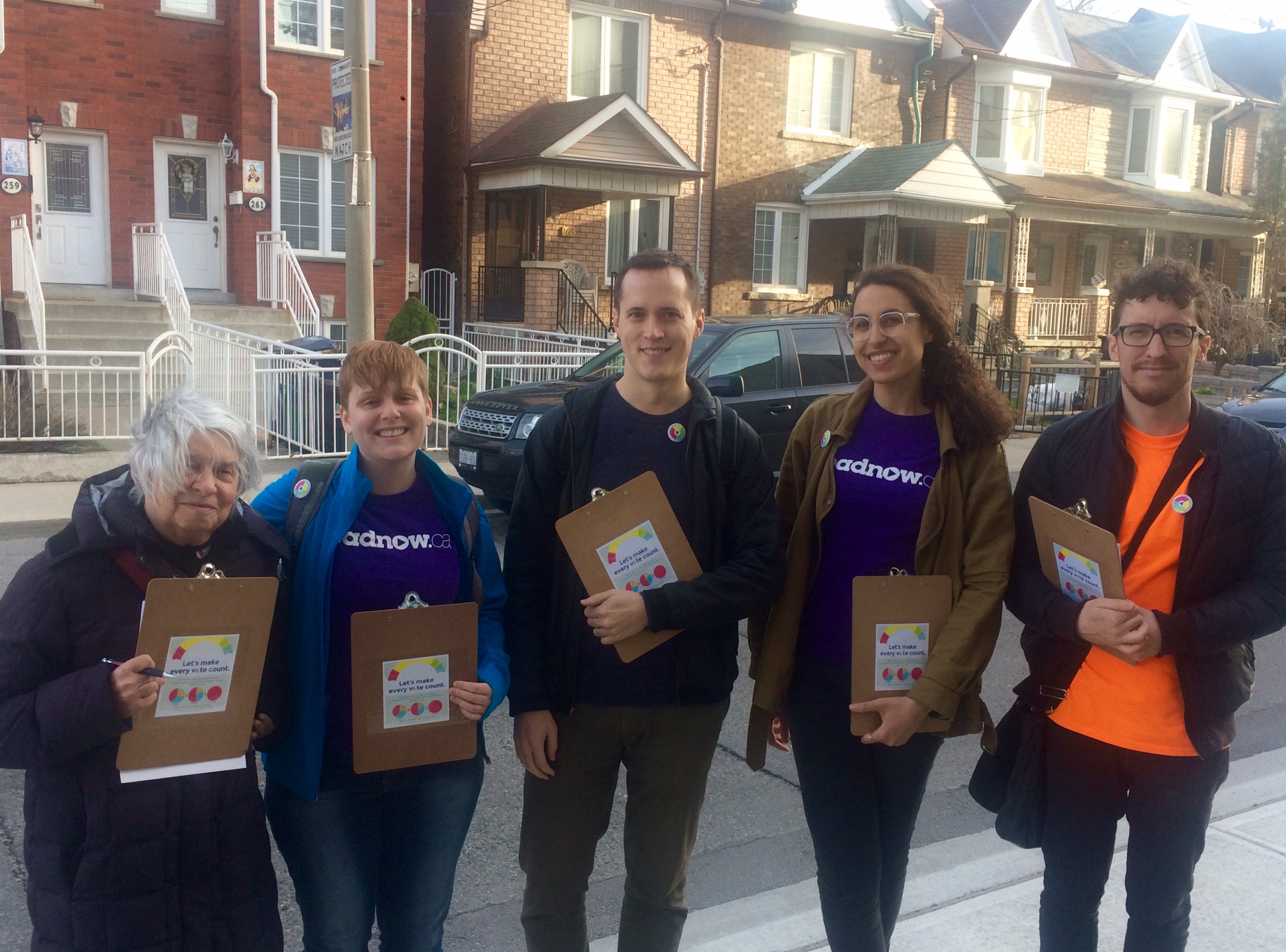 MP Nathan Cullen then announced he would be moving a motion in May to try to get Parliament to endorse ERRE’s recommendations. Doing so might have re-opened the window to electoral reform.

To put pressure on MPs to vote in favor of this motion we: Unfortunately, on May 31st the motion was defeated 159-146. Only two Liberals voted for it - MPs Nathaniel Erskine-Smith and Sean Casey. 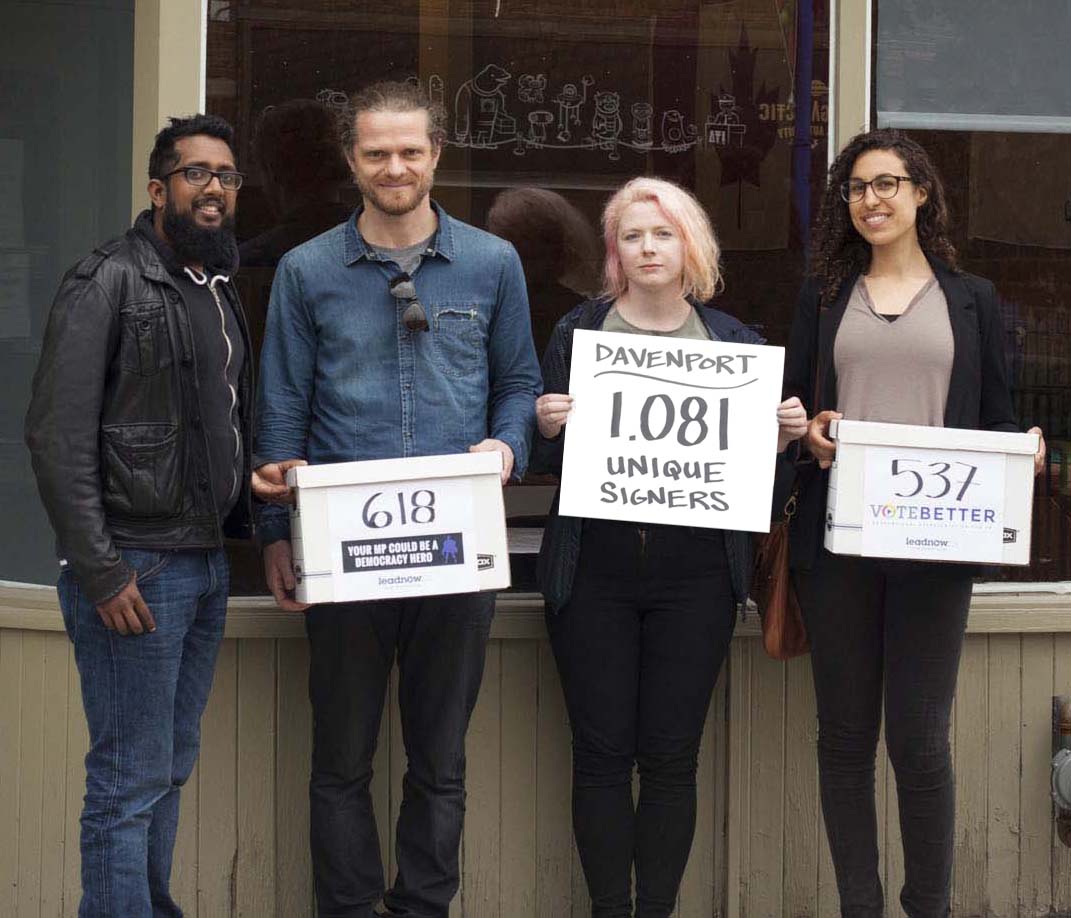 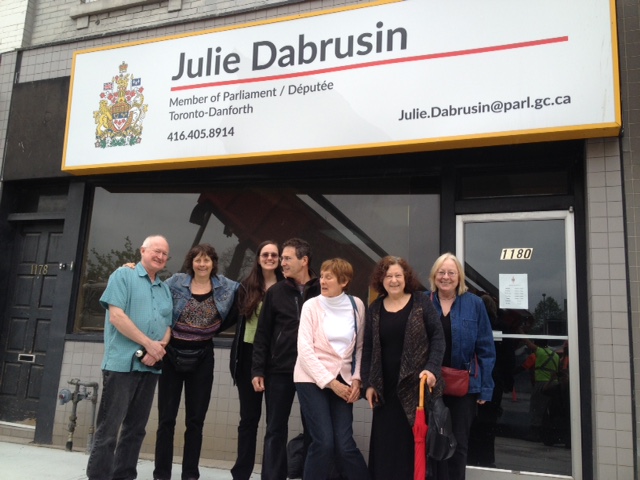 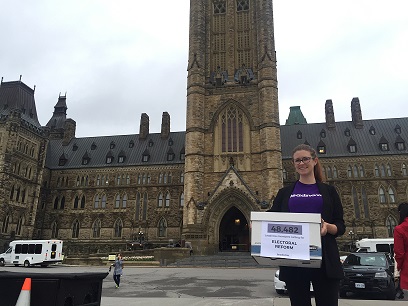 It’s been a long road, full of some wins and some setbacks. The window of opportunity to get electoral reform by 2019 is growing narrower by the day.

What we do know for certain is that this issue is not dead. We'll be surveying the Leadnow community soon to find out what you think we should do next. With referenda on electoral reform expected in BC in 2018 and PEI in 2019, we still have other fronts we can fight and win on. Taking this fight to the local level may just create the momentum we need to get it back on the federal agenda.

As for the Liberals - well, we won’t forget that they broke their promise. And we won’t be going away either. We’ll keep organizing and fighting to make every vote count. If we do, we know that we’ll win.